Riverview in the news

CBC Radio February 27, 2014. Podcast  move the slider ahead to the 31:05 minutes mark, where a short interview with  Shayne Ramsay, CEO of B.C. Housing, commences.

Globe & Mail:  Dark history may temper public input on former hospital at Riverview.
[ Dark history? from my researches a patient was much safer at Riverview, than being out in the general public. The level of care given was exemplary, considering the sometimes bizarre circumstances the staff would find themselves in.  ]

I went to the first public event that B.C. Housing has branded as Renewingriverview,with their website.
You can sign your identity possibly away, and provide online commenting via the above website, which in turn steers you to another website:  Placespeak   which has a convoluted sign up process that also in turn links to Twilio in their phone number confirmation procedures, and communication via telephony.
Frustrating experience I had with it all, Google, rightly informed me that email redirection was going on, and stopped an email that I sent to renewingriverview, and correctly placing any further attempted communications with these entities into my Spam folder.  By all means please comment though, just be vigilant

Download the Comment Form (PDF) that was provided  at the first meeting, which  I guess could be forwarded to the email address provided on the website:      questions@renewingriverview.com


All comments are to be turned in by March 15, to be used for the first round of public commenting

questions@renewingriverview.com
questions@renewingriverview.com
Renewing Riverview Communications
BC Housing
1700 – 4555 Kingsway
Burnaby, BC   V5H 4V8 - See more at: http://renewingriverview.com/questions/#sthash.6JDJmLci.dpuf
I was chatting with some of the staff, about the building condition assessments, since I was concerned that  a few of the buildings were not part of the assessment process, and was told that the building surveyor, was using a list generated by the Riverview Heritage Values 2012 report created last year.  Something, that I never saw in the report, well after chatting with a member of the public, I found out that actually there has been many reports generated that the general public has not been given access to, and the building condition assessment reports, were generated from one of these private reports.

My question would be to B.C. Housing; "How is the public supposed to give relevant well-informed input into the public process, when we are not given access to the tools required?"


Tri-City News:  GREEN SCENE: What's the future of Riverview?  [ A picture of mine was used of the Crease Clinic at dusk in the printed edition of the newspaper, but not in the online version. ]
The Coquitlam Now:  Big turnout for Riverview open house
Concerns with R'view open houses     [ glad to see that others are also seeing through this type of micro-managing that is being foisted upon the public in this present round of "public consultation" ] 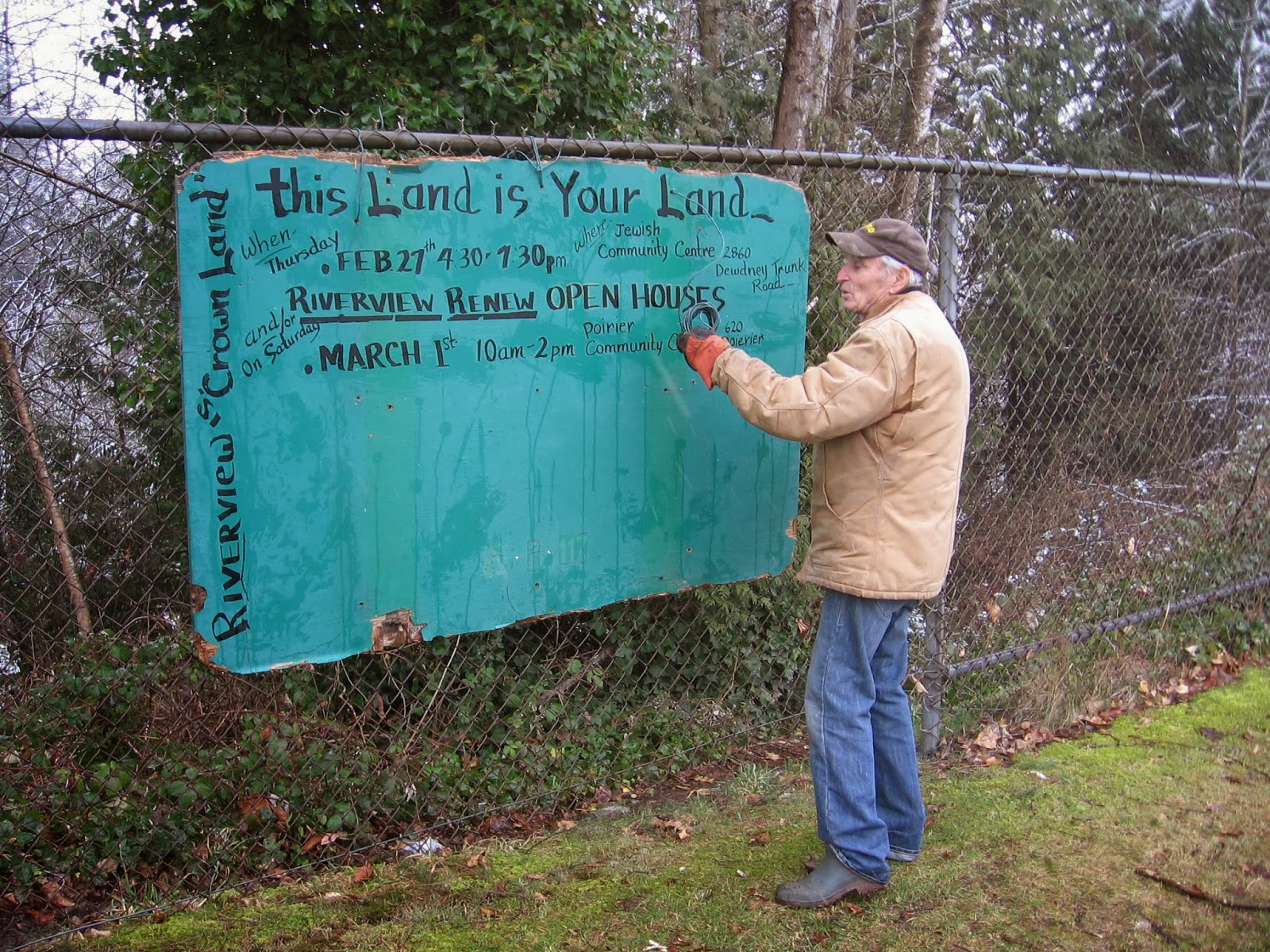 This Land is your land..... Doing our bit to publicize the events, Pete Seeger, would be proud 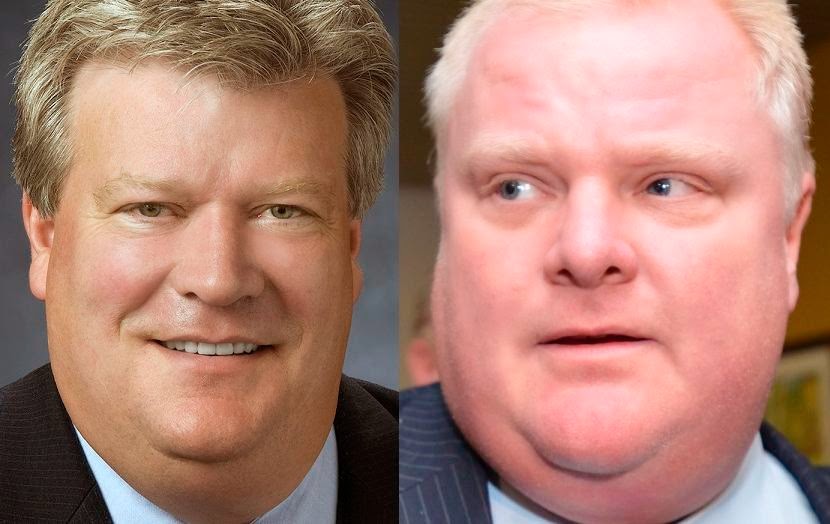 The fellow on the left is reponsible for B.C. Housing, the other fellow, well he could be his brother.

I will add to this post as more news becomes available, and now back to our regular programming, which may include having a look at some of  my images related to Riverview, organized into sets at Flickr.

Posted by niftyniall at 6:04 AM No comments:

Received this message, I have added  the correct links. As usual a very short period of time to respond, not unusual considering the short attention span of our commandant.

BC Housing will be distributing to over 16,000 Coquitlam households. [ A PDF of it HERE, a simple message, reproduced almost entirely below ]   I am advised that BC Housing will also be running ads in a number of media publications starting next week including the Tri-Cities NOW, Tri-City News, Metro Vancouver, and 24 Hours. They will also have digital ads on the Vancouver Sun and Province websites.

Two Open Houses have been scheduled to serve as an introduction to BC Housing, the project team and the Vision Process.  We look forward to your feedback.

Identical information will be available on both dates.

Saturday, March 1, 2014
10:00am - 2:00pm (Drop-In)
Centennial Pavilion, Centennial Room,620 Poirier Street, Coquitlam
(Beside Dogwood Pavilion, entrance off Winslow Avenue)
[View in Google Earth using a KML file ]
[  From what I have been told, 7 days after this meeting, all public commenting will close  ☹   ]

If you cannot attend the open house in person, we invite you to visit our website: www.renewingriverview.com  [ renewingriverview ] and participate in the online Open House. The Open House material will be displayed on this website starting February 28, 2014 and you will have the opportunity to submit your feedback.


Not much electronic chatter about this open-house.   Social media chimes in on Riverview

Have your say electronically, must sign up to comment at the B.C. Housing Corporations,  facilitators web forum  ( Placespeak.com )


-30-
Just by chance I found this myhealthmycommunity ( many very similar named sites out there too ) It has been up since June of 2013, but no mention of a cut-off date.
Which is a website put up, by Fraser Health, and Vancouver Coastal Health looking for input, I say give it to them; but be kind.  ☺

Lets all overload the servers involved, and send a collective message, to save Riverview, for whom it was intended all along, the health of the people of British Columbia, NOT the short term gain of some government accounting department.

And now for something on a happier note, trees and women, article from the Vancouver Sun.
Shelley Fralic: Surrey arborist sees the forest for the trees
Carolina Arango hopes to get more women interested in arboriculture

Demolition at Riverview raises concerns.   [ Eminent Destruction of the Transport Garage, or as the Hospital Annual Report, named it, "Central Mechanical Depot" was built starting in March 1954, and added to throughout the years. Picture of the site  for the history books, now.  Hopefully not the start of a destructive frenzy. ]
A few pictures for posterity 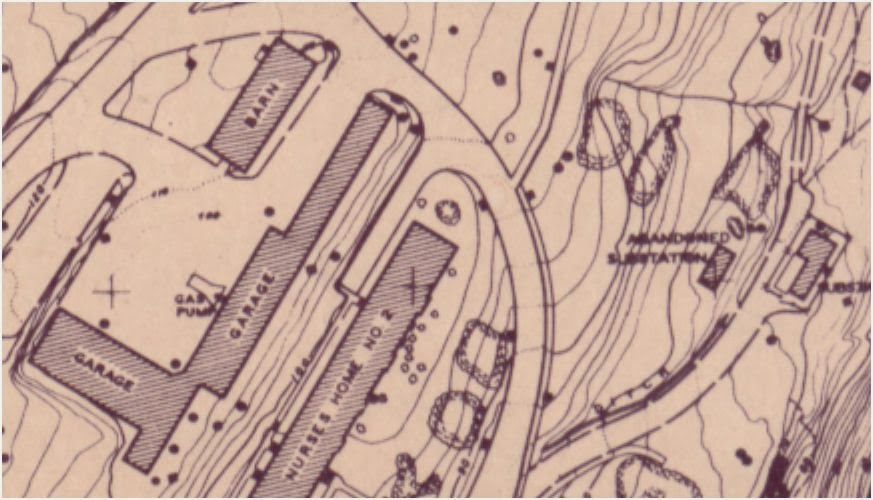 Note the barn, long gone, and the gas pump close to the garage.
Before closure the gas pumps were further away in the top left area in this image 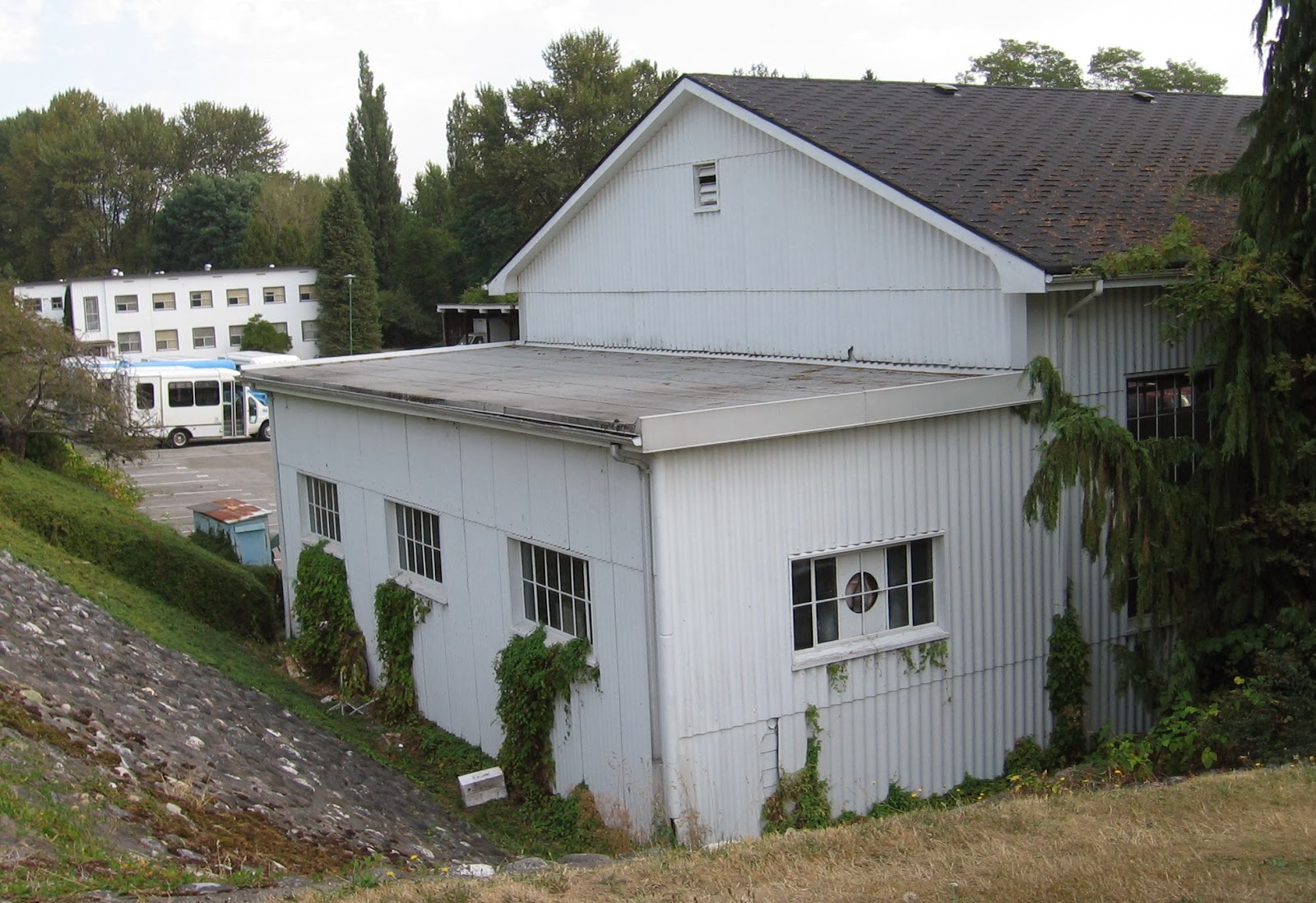 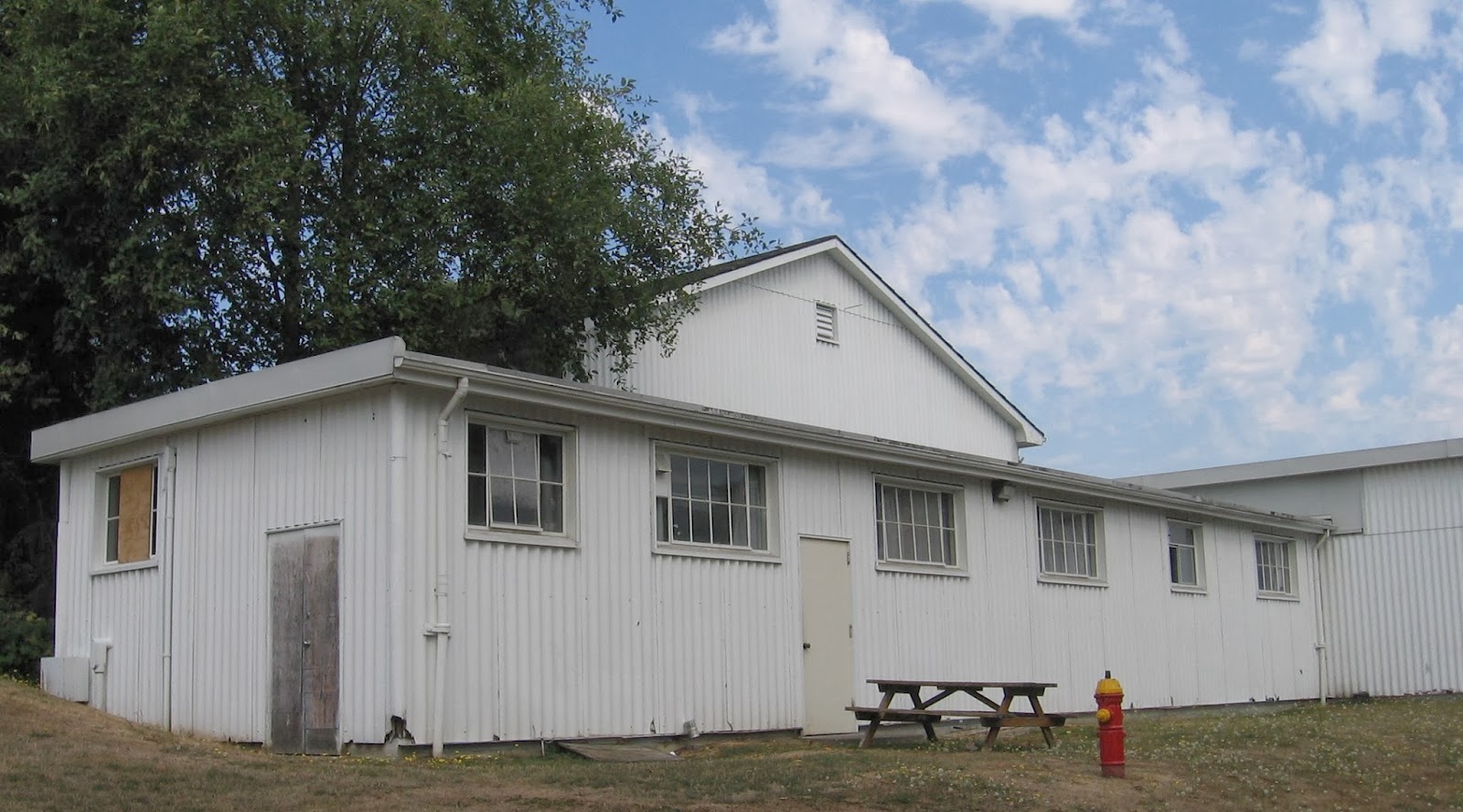 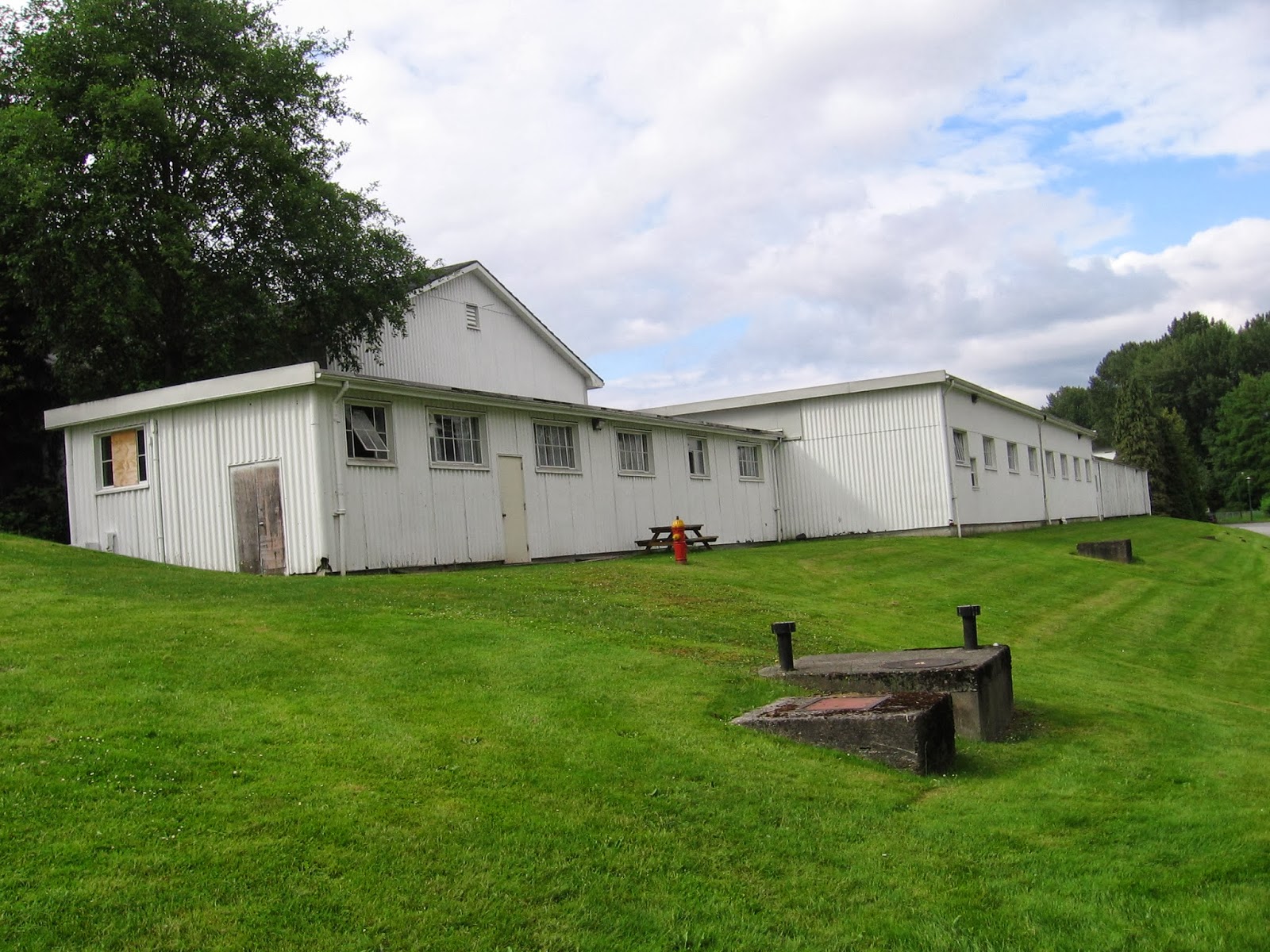 A good possibility that a few of the previous residents of Riverview, went to this care home, which has been told that Fraser Health will not renew their contract with them.Apparently Fraser Health wants them to provide more specialized care, which needs more room, to provide.  Hmm, Now where is a place that has lots of room and provided specialized care? The now gutted Valleyview 300, comes to mind instantly, North Lawn, also gutted and empty.
Family speaks out over Coquitlam care home closure
Coquitlam seniors care centre to close?
Continuing privatization of the health care system, with patients being used as pawns, in a nasty and cruel game, that will probably lead to the early demise of some patients.

CBC News Vancouver  Nov 15, 2013
Pieces of the land could be sold off to build condominiums   short video news item highlighting Coquitlam.
Missed this from last year, still pertinent though.