I thought that silly season had ended, how wrong I am. We can house all the senators and failed politicians with room to spare. At least we would know where the senators are really living.
Mayors calling for re-opening of Riverview Hospital
video clip: Re-open Riverview

Article about the probable cause of all this alarm; Tri-City News:  Cities target gaps in care for mentally ill
Maple Ridge News:  Maple Ridge council calls for Riverview Hospital to reopen

Global News:   Idea of re-opening Riverview Hospital gains traction
Some nice comments with this article, and one un-informed comment so far.

It appears that the story is gaining more legs than the average centipede...
The site was continually by previous generation dedicated to public health, lets keep it that way; get some life back into this beautiful property.

The venerable CBC radio had as a segment  on August 27;
Call for Riverview to re-open, Life-long learning.
Download the Podcast  [ mp3 file: runs 00:45:51 ]
Interviews with people  about re-opening Riverview, some retired staff, doctors, and head nurse Anna Tremere are interviewed.

Hopefully if the powers that be, "see the light" and re-open Riverview, and the decent bus service will resume again.
BUS ROUTE HAS CHANGED   Low ridership blamed for bus route changes 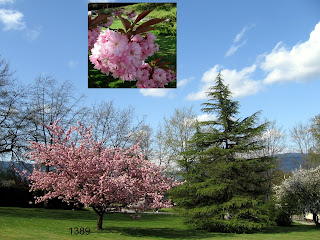 Treefest is in September
City of Coquitlam's webpage about Treefest, and other environmental events.
Download a PDF Treefest poster, for FREE !
Tri-City News:    Riverview Treefest on Sept. 14 in Coquitlam
Green Scene, column written by Elaine Golds, ( a picture from moi !)

Apparently this years Treefest is under-funded considerably from past years, and the government bureaucrats have moved the venue area from the HEY building
(which is being used by the movie industry, these days apparently)
to the area in front of the I.D. building,(Industrial Therapy, Industrial Services), which is nearer to Finnies Garden, but farther away from the rather limited access to public washrooms.

The staff also are adamant that they will not  have a portion of the lawn cut  as promised in a past meeting for this event; Typical !  And of course the public is not allowed to cut it either, even though we do own it !
Destruction by neglect of hard-earned taxpayer dollars that went into creating the hospital; but you can bet that the bureaucrats are still being paid handsomely.     Guerrilla grass cutting anybody ?
Posted by niftyniall at 9:17 PM No comments: