"A Memorial Ceremony at the Riverview Cemetery" 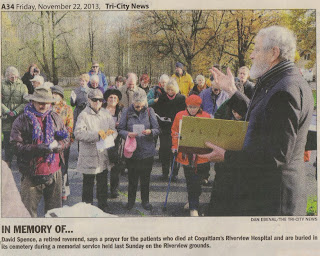 Article in the newspaper:  Remembering Riverview’s dead
We even have a Jane Doe interred there, who knew?


Now is a timely opportunity to ensure that the religious/spiritual Life of Riverview is given proper recognition and attention.

In the midst of high profile debatable issues around Riverview, a pause needs to be taken in order to remember and to celebrate the sacred history of the Riverview "Estate" Lands.

As a significant part of this recognition, a Memorial Ceremony is being planned for Sunday afternoon, 17th November. It is to be held in the Cemetery, off Lougheed Highway, at the eastern side of Riverview garden.

The Ceremony will honor, not only the religious programs of the "Estate", but even more so, the people who are buried and resting in peace in the cemetery. Beneath the shadows of the ancient oak trees growing along Orchid Avenue, the promise of a new future is imagined and hoped for as individuals are remembered and their lives celebrated.

Over 1,000 headstones, flush even with the ground, mark their individual places. Their 'resting in peace' in the hallowed ground acknowledges who they are and to whom they belong as much as the sacred identity and integrity of Riverview itself.

The Ceremony will include prayer, song, readings, and the scattering of flower petals by different leaders in the community. The public is invited to attend and to participate in the event which begins at 2:00 p.m.

The Memorial Ceremony is intended to provide that opportunity to build community awareness and to express gratitude for the heritage of the Riverview "Estate" Lands.

Posted by niftyniall at 6:29 AM No comments:

October is upon us

A letter replying to the above article:  Thursday, Oct. 3: Riverview healed my mother, saved my childhood

A letter in the local paper:   Riverview saved my life  Great to hear the voice of former patients.

More than 200 new beds for seniors, people with mental health issues announced.
[ Further hardening up of the privatization of the health care industry. The shit hits the fan though when these for-profit groups want more money from "OUR" government, and the patients are used as pawns ]

World is lighting up purple for mental health
Can you say Barney ?

Gathering information on the names of the people interred in the cemetery and inviting their families to participate in the event. Sunday, November 17, 2013 as the potential date for the Memorial Service.
A project still in the planning stages.

We are at the early stages of another planning process, apparently the present land management outfit: Shared Services, is transferring their control of Riverview to BC Housing, will be interesting to see how that works out, No idea who actually will be in total charge of the fort, as usual.
BC Housing will be starting a planning process to look at revenue creating ways to maintain the buildings and grounds, about time! It was very noticeable through the years how the site had empty space; that I know local groups would have loved to have, but were turned away  when they asked. Will be interesting to see if this attitude will change.
As a goodwill measure they have started to cut the lawns again, a good neighbor thing.
A few local news articles:
Not a 'surplus asset'

Cutting the grass, BC Housing says, shows it means business about Riverview's future
Correction to the above article from Anna Tremere:  As a point of clarification re "bodies of thousands of patients lie in rest."   My comment was that "there are over one thousand patients interred in the cemetery."  The actual figure I was given by Shared Services in 2012 was one thousand and eighty five patients interred.

[ I am looking into getting the list of internments in the cemetery, and will ask if it is allowed to be made available to the web.]

This closure was 'nuts'
It's time to talk about Riverview

Another letter from a patients family:  Renew Riverview Hospital to support mental health

Found out on the side that they are making 500-800,000$ per year from the movie industry use of the site.
And that it is costing actually about 3.5-4 million per year to maintain the site.

The Greater Vancouver Water District is scheming away to run a large 2 metre diameter water pipeline to Surrey through the western end of Riverview and along the western edge of Colony Farm; one giant huge mess ahead. See map below the Yellow line was an early idea, that has now been changed to the blue line idea. 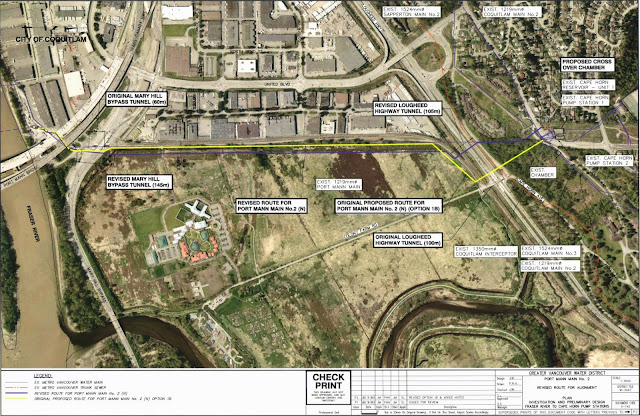 Posted by niftyniall at 5:18 AM No comments: